You know how a lot of bloggers have their husbands write a guest post? Mine prefers to give me ideas of what to write and fun titles.  Which is what he did for this post.

I wanted to write a little bit about our experience with Post-Traumatic Stress Disorder.

For those of you who haven't read our story, Rob and I were together for a year and a half before he joined the Army and was whisked away to Georgia, Alaska, and later Iraq. His deployment to Iraq was a tough one--he was shot, was involved in countless explosions, and lost a few friends.  His MOS (or job) was 11B - Infantry - so this was exactly what he was trained and prepared for. 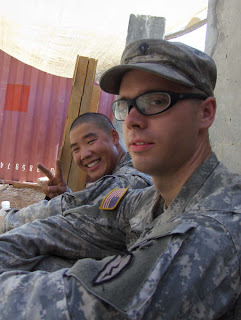 One of the most common questions I get when people find out that I'm a former Army girlfriend/wife/partner/whatever is a cautious, "Is he okay?"  It's interesting to me that Post-Traumatic Stress Disorder has become such a familiar term in our collective consciousness that in this situation we both know exactly what we're talking about.

Anyway, as an answer to that question, yes, my husband is okay.  He and I were both lucky that he came back relatively unscathed, both physically and mentally.  This doesn't mean that he hasn't ducked and covered at the sound of an unexpected fireworks display, or hasn't been reduced to tears by a song or another reminder of one of his lost friends. It doesn't mean that something as simple as being cut off by a car doesn't make him see red, or that people asking him "did you see anybody die?" doesn't frustrate him into near-silence. It doesn't mean that he hasn't yelled death threats to our downstairs neighbor after that neighbor yelled at our dog for walking too loud (for real, we moved after that).

It also doesn't mean that he is a victim or someone to be pitied.  Though he is happy to be free of the military, we both know that he would do it all over again in a heartbeat.  His military experience is always with him in one capacity or another because it helped to make him who he is today.  I know that the comraderie he feels toward the men he served with is a friendship I can only begin to grasp, because it was an experience that I have no way of truly understanding.

What is interesting about our situation in particular is that PTSD is something that Rob and I share.  While I would never come close to comparing what I've gone through to his combat experience, PTSD in some form is regardless still very present for us. 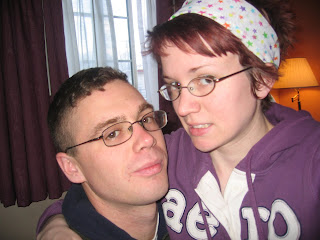 For my part, I still deal with remaining family issues from my youth and early adulthood, the death of my best friend at a young age, and in a secondary way, my husband's army experience and the many goodbyes and nervous nights.  These experiences have impacted how I approach just about every situation, from dealing with criticism and authority to worrying that Rob will up and desert me at any moment.

I wanted to write this, I guess, to say that though PTSD might seem like a bit of a handicap or stumbling block in a marriage, facing it and dealing with it has given us real experience in dealing with the give and take required of any relationship.  Somehow, when Rob finally got out of the Army, we transitioned into living together as though we were picking up where we left off...despite the fact that we had never lived together before.  When Rob is weak, I am strong.  I take over making phone calls and scheduling appointments when he doesn't want to deal with people, or remove him from a situation that could cause him frustration or anguish.  When I am weak (the far more common scenario) my darling husband takes the role of calming me down, hugging me, and letting me know that I am loved when I most need it. 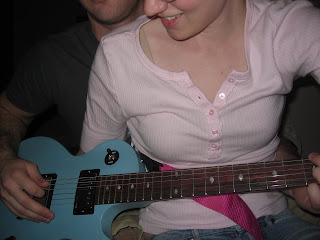 All in all we  are the sum of our experiences, both the bad and the good, and in our case I wouldn't have lived our lives any differently or changed anything.

I hope this doesn't come across as a whiny or negative post (a constant fear of mine).  I know that there are many whose situations or life experiences are far worse than ours. I only wanted to share a little honesty about our experiences and how we've landed at where we are today.

Rob and I both think that this song pretty much covers it: