I'm off to get my sixth tattoo today. Here was my inspiration: 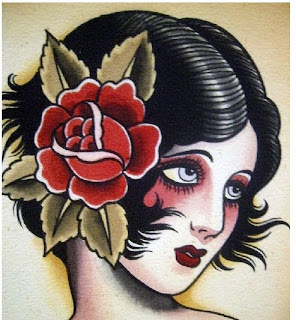 I gave my artist the above picture and told him that I wanted him to draw his own version of it (perhaps a questionable idea, because he typically draws zombies and skulls, but what can I say, I trust him). There will be a kind of vintage banner below her name that says "The Stardust of a Song."
Meaning:
My grandparents were married 3 weeks before my grandfather left for World War II. They were separated for a year and a half before they were able to begin their life together. Rob and I, due to our own wartime separation, feel a real connection with my grandparents and the love they shared.
My grandparents both passed away within a year of each other, in 2009 and 2010. It was a huge loss for my family and we've all felt a little directionless since they passed.
So the vintage war-bride type tattoo is an homage to them and their love. Their song was "Stardust" performed by Hoagie Carmichael, which explains the lyrics that will appear below her head.
I'm definitely much more excited about this tattoo than I've been about any of my others, primarily because it's so meaningful, but also because it's my first color tattoo.
Do any of you (assuming anyone reads this) have tattoos, or are planning one?
Posted by Caitlin at 7:00 AM 1 comment: