The Weekend Story So Far

This weekend has already been quite eventful.

On Friday, I decided at around 9 pm to make nachos, which necessitated a trip to Hannaford before it closed at 10.  Rob was in the middle of watching Top Gun, a childhood favorite, and was anxiously awaiting the scene in which Tom Cruise and that blond chick engage in lie-down kisses.  I told him I would go to Hannaford without him, which precipitated a great internal moral dilemma for Rob.  Sexy Tom Cruise, or time with wife?

I told him I was fine with going by meself, and grabbed my keys and wallet and ran for all hell out to the car so he wouldn't miss one of his favorite scenes. I frantically put on the first shoes I could find--which turned out to be my hiking boots, which paired fabulously with my NY&amp;Co skinny jeans--ran out the door giggling and started the car.  I thought all the car doors were locked, but my sneaky-ass husband remembered that the back door was open and snuck in behind me.

My husband is extremely adorable.

Later that night we got back into the car to drive to a big open field so we could watch the meteor shower.  Unfortunately we had a full moon, and only saw one or two actual meteors.  But the time spent together doing silly fun things is always a time I treasure.

Note: The below pictures aren't taken with my fancy-shmancy Nikon, obviously.  Usually when I'm going on some sort of adventure with my husband I try not to bring it, because all-too-frequently I get so wrapped up in getting the right picture that I end up missing the actual experience.  Pictures are nice, but the actual memories are far more important for me. 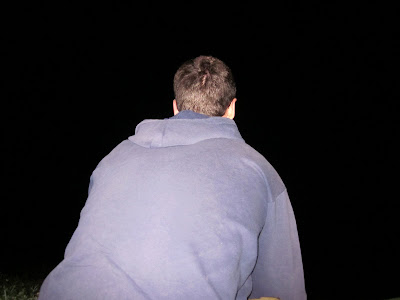 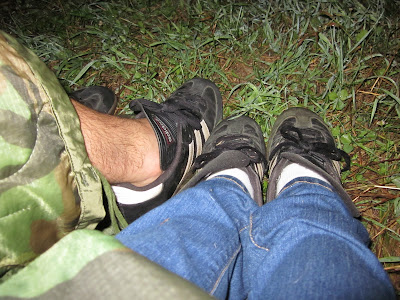 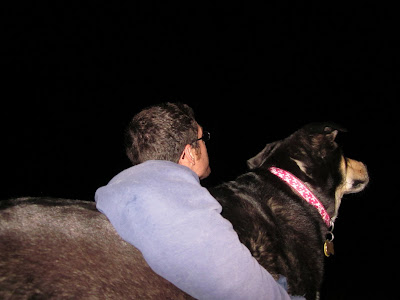 I have a really cute picture of Rob and I but Blogger/Picnik is being a fart and isn't letting me rotate it properly.

Today I went for session 2 of my matryoshka tattoo. I'm bandaged up but I asked Adam to snap the following picture with my phone: 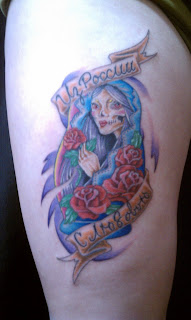 Beautiful, eh?  This one hurt like a mothereffer for some reason, more so than my other tattoos. When I came home I actually felt sick and dizzy.  Whine, whine, whine.

I hope you all are having a great weekend so far.