After getting the tattoo I talk about below (which turned out really well) I was motivated finally to go for an upper arm tattoo (a half-sleeve). This was a difficult decision to come to, as I have a corporate job that does not look kindly upon visible body modifications. However, I spoke to a few professional mentors, my husband, and most importantly, myself, and realized that this was the right decision at the right time.

Then came the design. I knew I wanted something in a vintage sort of style, perhaps war-related in some fashion. The idea of paratroopers came to mind, as my husband jumped out of airplanes in the Army. He spent 13 months in Iraq, during one of the most tumultuous times in the war and in what was at the time the most dangerous area in Iraq. I have a lot of pride in my husband and what he did, and I feel that it shaped both him and me, as well as our relationship and our marriage.
So I had the plane and the paratroopers, but I needed a way to tie it all together. A good friend of mine suggested poppies, a flower that is typically associated with World War I and, more recently, soldiers who are killed in action or just military service in general. I thought the red poppies would be a great pop of color, and initially thought that the tattoo would be predominantly grey, black, and red.
I gave my artist the following collage: 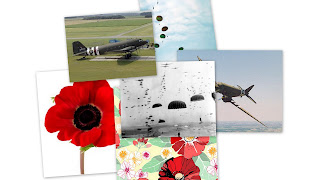 I wanted the plane to be a C-47, the plane that WWII paratroopers jumped out of, as sort of an homage to military members past (including my grandfather, who served as a doctor in World War II).

On the 28th I revisted my tattoo artist, who had come up with a design. I wish wish wish I had taken a picture of it, but I didn't want him to think I was "stealing" it or being obnoxious, so whoever reads this will just have to wait! :)
Anyway the design he created was even more amazing than I could've ever thought. Describing it can't really do it justice...basically, the perspective is looking up from a field of poppies to a plane overhead with paratroopers falling from the plane. My artist is super excited, as am I!
My first of maybe 3-4 sessions is next Saturday and I couldn't be happier. :)
Posted by Caitlin at 8:20 PM