As a naturally neurotic person you can imagine that I also have a proclivity toward phobias. And like most phobias by definition, mine are based on theoretically logical circumstances but are, in and of themselves, extremely irrational.

I’ve looked this up and there is a name for it (mechanophobia). Basically, any large machine that runs or moves on its own without any discernible operator causes me anxiety and panic. Example: Rob, my father and I were driving home from New Hampshire one day maybe 4 years ago and we came across a train crossing (more on THAT fear later). The train had just passed and the arm of the--I don’t know, the lifty thing? Whatever the hell it’s called--raised up and for some reason the smoothness of the motion made me feel nauseated.

Another time Rob and I were at Universal Studios in the Jurassic Park ride. While you’re floating around in a boat animatronic dinosaurs rise up from the water and move around like I suppose dinosaurs would. It made me extremely panicky to think about what those dinosaur machines looked like underwater—sort of like dead bodies, I reasoned (that’s another thing, I don’t like non-aquatic things being underwater)—and I had to stop thinking about it before I started to cry.

The most recent situation occurred at the mall last weekend. At our mall there is a carousel, which I’ve never had an issue with before. But I had to avoid it while it was moving…the bright lights, colors, caricature-esque horses, smooth and independent motion… it just seemed like a nightmare from a horror movie.

And finally, I can’t go into the car wash by myself. And if I’m in the car wash, I have to plug my ears and put my head between my knees. 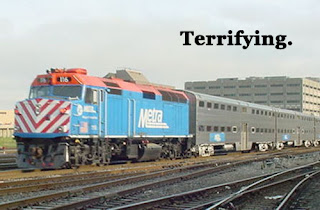 This also has a name, perhaps surprisingly—Siderodromophobia. This sort of developed over the last few years or so. I can be in trains and next to trains, but I can’t stand in front of a train or have the train operating behind me (more on my chasing phobia later). The front of them, especially those pointy ones, are the worst. My sister and I drove by a train car that was totally grounded, not on a track or functional at all, and it looked about 10x bigger and darker to me as we drove closer to it and when I look back on it I see it in the same way.

When I speak of this fear people often think I'm saying "being chaste," but I assure you I have no fears in that department. Apparently there is no name for this particular fear. As the description pretty self-evidently states, I hate the idea of something or someone behind me. No matter the situation I feel like that person or thing is trying to chase me. Whenever I run up the stairs, with Rob following, I always go even faster and beg him, “don’t chase me!” I always figured that if I got into a situation where I was being chased I might just give up and allow myself to be caught!

Do you have any phobias?

Interested in phobias? You can waste hours on this site.
Posted by Caitlin at 9:29 PM