I visited my tattoo artist for the fourth and penultimate time this last Saturday to finish up my half-sleeve. During this session he colored in the plane and the paratroopers, plus cleaned up the sky a little bit.
Here is an admittedly sketchy picture: 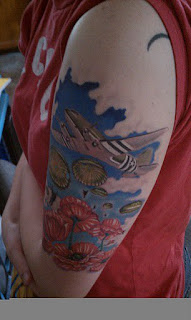 I am absolutely in LOVE with this piece. As I've spent more time thinking about it it means more and more to me...and the session is a breeze to sit through despite lasting six hours.

Rob and I recently watched the movie Restrepo, which, if you haven't seen, you should go watch right now. The deployment depicted was one very similar to Rob's (heavy contact, several casualties) so it gave me a completely new perspective on what Rob was going through while I was in college whining about how hard my life was. I had no words once it was over, but my heart was proud; proud both of him for going through it and for us for coming so far. The tattoo gained a whole new dimension and I can't help but think about everything we've gone through every time I look at it.

Anyway, I go back in early April to work on the clouds surrounding the image and tighten the rest of the image up as well.

I've already started moving on to another piece. Thinking a matryoshka (nesting) doll on my thigh with a banner in Russian, saying "Из России с любовью" (From Russia with Love).